Trending
How to Start a Successful Online Classified Business with Clone app What is ICO Marketing Strategy: How to Promote your ICO Effectively The Ultimate ICO Marketing Checklist in 2021 How blockchain technology is changing finance? Content Marketing Tips That Will Increase Sales on Shopify eCommerce Stores

How blockchain technology is changing finance?

More than ten years after its creation, the blockchain has gone from being only the sophisticated support that makes Bitcoin transactions possible, and some other cryptocurrencies, to becoming one of the biggest promises in the economic sector. To see how this evolution has taken place, in this article we will focus on the application of blockchain technology to companies.

Blockchain technology could transform the financial system in the same way that the Internet transformed communications. Throughout this time, the importance of blockchain for different companies and industries has grown: from imagining a platform for payments in cryptocurrencies -which for a few is already a reality- to wider and more revolutionary uses than some of the most innovative companies the world are beginning to implement.

Beyond the world of cryptocurrencies – which is the reason why this technology emerged and became popular – by expanding its use and being integrated into the operations of companies, blockchain technology has the potential to improve not only the efficiency and security of companies but increase their profitability and improve B2B relationships.

More and more industries are interested in implementing blockchain in their processes and we are approaching the scenario that Rometty raised five years ago, according to which once it is adopted on a large scale and widely used by companies, the blockchain will transform the world.

But before we delve into how it could transform the economy, advantages, and possible applications of blockchain technology in companies, let’s start by explaining what blockchain is and how it works, one of the most disruptive and revolutionary technologies of recent times.

What is the blockchain?

With a peer-to-peer (P2P) architecture, also known as a peer-to-peer network, the blockchain, means a chain of blocks and is a distributed ledger technology —or DLT, that is to say, a decentralized database that makes it possible to dispense with an external system or intermediaries to carry out operations. This is possible because the information that is stored is distributed in different places practically in real-time and cannot be modified. With the Blockchain model, validity is verified by the network of nodes that participate in the blockchain but not verified by a third party. Hence, no transfer of value is carried out through an intermediary, but rather through consensus, allowing information to be stored at all times transparently”.

This is the reason why asset transfers can be made (as is the case with Bitcoin) without the participation of a bank or some other financial institution.

The blockchain is an open infrastructure that stores many types of assets. It stores the custody history, ownership, and location of assets, which could be certificates, contracts, real-world objects, and even personally identifiable information.

How does the blockchain work?

Five basic principles explain how blockchain technology works. These are:

Each participant of a blockchain has access to the database and its complete history. However, none of those participants controls that data. All participants can verify transaction records directly, without the involvement of third parties.

Each transaction and its associated value is visible to all those who have access to the system. Each node or user in a blockchain has a unique address of more than 30 alphanumeric characters with which it is identified. Transactions occur between these addresses. In this way, users can choose to remain anonymous or provide some kind of proof of their identity to others.

Once information about a transaction enters the database, the records cannot be altered, as they are stored in blocks. Each block is encrypted and connected to the previous one in such a way that the entire history of the blockchain is cryptographically reflected in the most recent block. Hence the name blockchain.

Users can configure algorithms and rules that automatically trigger transactions between nodes due to the digital nature of distributed ledger technology.

It is for these reasons that blockchain technology is considered one of the pillars of what will be the network of the future, the so-called web 3.0.

However, the above characteristics describe above all the operation of a public blockchain that is used mostly to carry out transactions; But there are also private blockchains, which allow a company to create and manage its network, which can be used within the company or between different companies in a field (B2B), for example.

Although the most widespread use of blockchains is related to cryptocurrencies, in reality, the blockchain can be applied in any industry that requires a record of information.

To get into the subject, let’s look at some benefits of blockchain technology for companies.

The implementation of solutions that use blockchain technology in different business sectors increased considerably. What was once a mere possibility and a field of research and innovation has begun to have practical applications. “The blockchain is an integral and vital tool with which new cutting-edge solutions are being created.” And these new solutions are transforming the business world, “When implemented correctly, the blockchain fundamentally changes the way a company operates and can affect the entire organization. “

Let’s see now what are some of those solutions and how blockchain technology can be applied by companies and can benefit B2B companies.

The largest implementation of blockchain technology and perhaps the most obvious, by companies is precisely that it allows them to make and receive payments to and from anywhere in the world much faster than through traditional means.

Currently, companies are building their blockchains for industrial and commercial purposes – which go beyond the financial sphere – since with blockchain technology the speed, traceability, and security of processes are improved, which is especially attractive for the world of the B2B.

Sometimes the information in the supply chain is not completely reliable or is not available. By migrating the supply chain to the blockchain, companies can ensure the quality of information, safeguard its integrity, and benefit from a transparency process where everyone knows where assets come from.

Because a blockchain is accessible to all members of the network, “this ‘shared version of events’ – enables supply chain improvements, improves collaborative work and optimizes problem-solving when exceptions, errors or disputes occur ”.

In addition, at a global level, the blockchain allows tracking of the goods produced by different companies, reducing the margins of error and increasing the efficiency of all processes in the supply chain.

By providing an immutable system of record, the blockchain ensures trust and transparency in B2B environments.

As all the records exchanged at the B2B level – bills of materials, invoices, certificates of origin, purchase orders – are part of the blockchain, all this information is visible in real-time to those who have access to the blockchain.

Thus, to have greater control over the origin of its products, Walmart implemented in 2018 a food tracking system that operates through blockchain. With it, a process that previously took a week can now be done in a matter of seconds and, in case of having a defective product or contaminated food, thanks to blockchain technology they can know in moments where it came from and where it is to proceed. to withdraw it from the market.

For their part, the development of smart contracts represents a set of rules established in advance and encoded in a chain of blocks. They follow an agreement between two parties and are automatically executed once all conditions are met, all without the intervention of a third party.

Among the most important innovations being developed are peer-to-peer economies, dynamic and distributed payment infrastructure, smart contracts, digital identity, property, and intellectual property, among other areas.

With the global economy changing at a fast pace, business models must be agile and adapt, making use of innovations and new technologies to save money, all while building a stronger reputation and community in an increasingly digital world.

That is why companies like Syniverse are betting on the blockchain to reduce the complexity of one of its key services.

Blockchain in the donation industry

For its part, UNICEF, the United Nations Children’s Fund, is exploring how to use blockchain to improve the collection and distribution of humanitarian aid.

As part of that effort, the agency is investing in use-case-focused blockchain startups that could help UNICEF’s mission. Applications include how to use blockchain to facilitate payments, securely share prescriptions, and create more transparency on how donations are used.

What is the future of blockchain technology?

When this technology emerged in the early years, closely associated with cryptocurrencies, it has been finding applications where it provides a lot of value and that is why blockchain technology has become increasingly established and many companies are already immersed in projects that include it.

However, experts also say that many organizations are not technically equipped to implement blockchain, even if they have a compelling use case.

In addition, the implementation of blockchain requires new procedures, staff training, and support from regulators. One of the biggest barriers to general acceptance of blockchain, as is the case with all new technologies, is reconciling legacy systems and traditional ways of working with these new developments.

In this regard, many experts are convinced that blockchain will live up to its transformative reputation, eventually and inevitably, by offering significant improvements to existing business processes, enabling new business models, and dramatically reshaping the way entities interact digitally.

Blockchain is here to stay

Today, blockchain is being applied to business processes that have been costly and time-consuming due to its complexity and opaque nature. Value transfer and settlement are the most obvious and most common use cases for blockchain now, but tech experts hope that tracking the provenance of goods in supply chains and transferring data across multiple parties also prove to be processes deeply transformed by blockchain. Many bet on the future of this technology, although the time is unknown, it is transformative. Blockchain is here to stay because it is full of many opportunities and a future that it assures is going to be incredible.

I am Yokesh Shankar. Co-Founder of BlockchainX, My vision and time to offer the best products for our clients without apprehensions at economic rates. Making virtual dreams a reality, My interest in Blockchain technology and crypto started when I was an undergrad. It has since then transformed into something much bigger for me. I believe that Blockchain is undoubtedly the future of technology as we know it, and have been trying to share as much knowledge as I humanly can with people. From analyzing and assessing the clients’ requirements in detail to proffering the best Blockchain and Crypto Consultant 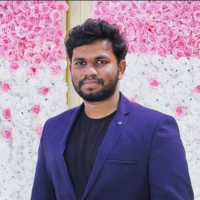 What is Decentralized Finance (DeFi)?

What Are Metaverse Tokens

Sign up for Davenport’s Daily Digest and get the best of Davenport, tailored for you.